Welcome to the online catalogue for the Super Bowl LVII Live Auction.

Online pre-bidding ends Friday, February 10th at 10:00pm MST. Pre-bids/ceiling bids left at huntauctions.com will be executed during the live auction on February 11th (Lots 1-391) at 12:00pm MST. PLEASE NOTE THAT THE TIME WAS PRINTED INCORRECTLY IN THE CATALOG. After online pre-bidding closes on our website, the auction will move to the live format, with bidding available via telephone, absentee, and online interactively via Invaluable (see below). If you wish to phone bid during the Live Auction please call 610-524-0822 or email info@huntauctions.com before February 10th. Please note, you do not have to pre-bid in order to bid during the live auction.

If you have any trouble bidding on auction day, February 11th, please call our office at 610-524-0822 so we can assist you as quickly as possible.

Online only lots (Lots 392-end) will close at 10pm ET(8pm MST) on Saturday, February 11th with bidding continuing for 20-minute intervals. Phone bidding will not be available for these items.

Live Interactive Online Bidding will be available to all registered Hunt Auctions bidders.
This bidding platform will provide Hunt Auctions bidders the ability to participate with real time interactive online bidding during the live auction. The interactive bidding will be powered by Invaluable and may be accessed via a link that will be available closer to the date of the auction. Bidders must have a valid Hunt Auctions username and current email address to bid interactively online during the auction. Please note, unless you have already received premiere bidding status and plan to bid live online for item(s), $20,000 is the total bidding limit, you will need to be preapproved as such.

Lots 1-22 AND 301-351 originate directly from NFL Auction. These specific pieces are accompanied by certification from the NFL and are noted as such within each applicable auction item description. An additional grouping of items originating from NFL Auction are offered within a later portion of this catalogue and are also specifically noted as such. This particular grouping is one of the finest of its type to have been offered at public auction and we are particularly proud to present such a superb selection of materials. NFL Auction is the official auction site of the National Football League and the only place to bid on guaranteed and authentic signed, game-used items and unique NFL experiences. The NFL does not profit from the sale or auction of items on the NFL Auction platform. Charitable contributions are awarded by the NFL Foundation to the NFL's nonprofit partners such as the American Cancer Society, USO, Wounded Warrior Project, St. Jude Children's Research Hospital, NFL Player Care Foundation and many team and player charities. This has included more than $8.5 million in charitable contributions over the past seven years. For more information, please visit nfl.com/auction. 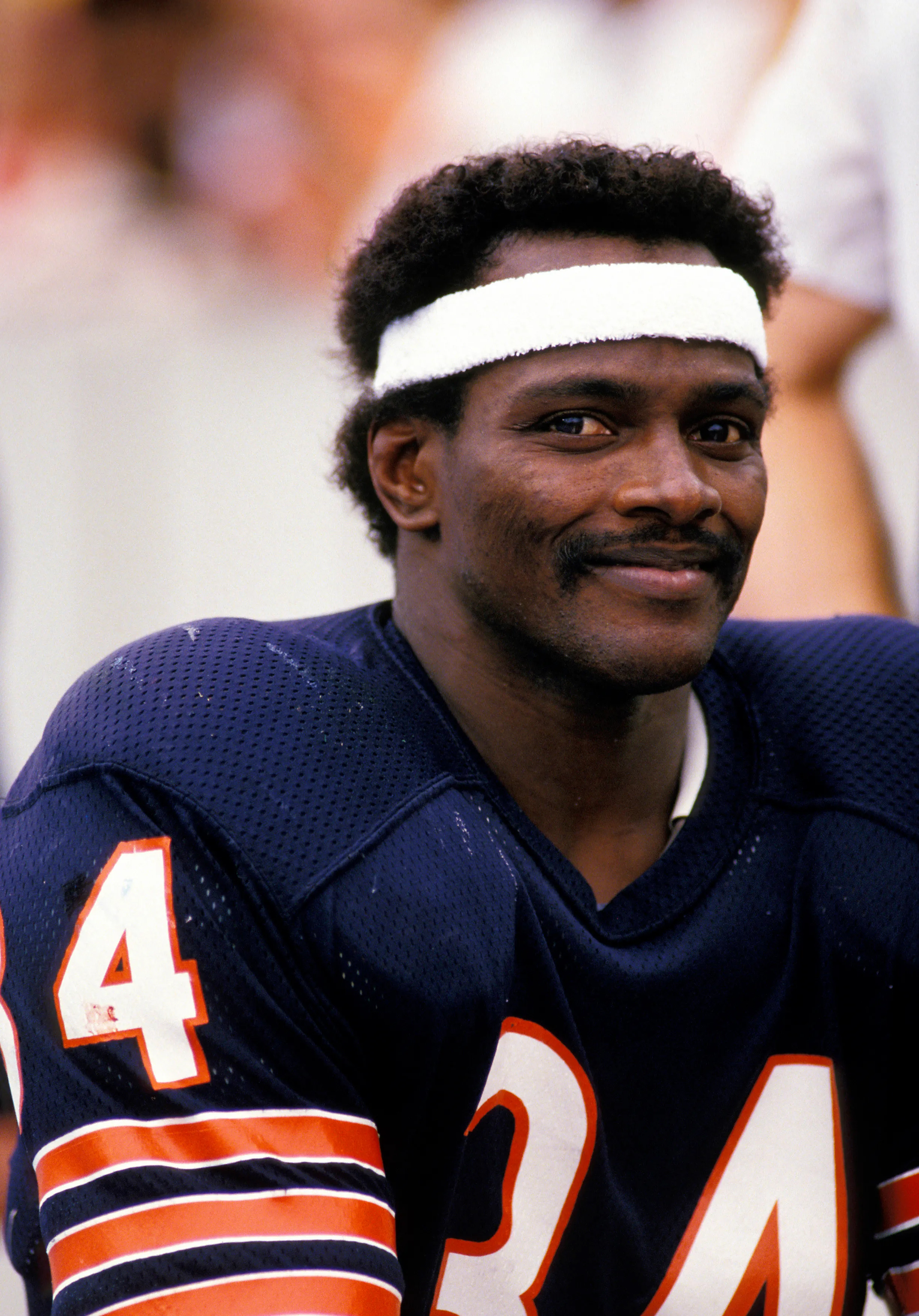 The following lots 138-202 originate from the personal collection of Walter Payton. No better nickname could apply to Payton than "Sweetness" although opposing defensive players may certainly object to same. After excelling at Jackson State Walter was selected as the fourth pick of the first round in the NFL Draft by the Chicago Bears in 1975. His impact on the Bears franchise and the league overall was immediate and revolutionized the running back position within the game moving forward. In his rookie season he earned his first of nine Pro Bowl selections and followed it up in 1977 with one of the greatest offensive seasons in NFL history. During that sophomore campaign Payton led the league in rushing, touchdowns, was named to the Pro Bowl, named to First Team All-Pro, named as NFC Offensive Player of the Year, and selected as the Most Valuable Player in the NFL. Payton's career statistics and related accolades appear as though generated for a fantasy league. He would finish his career with over 16,000 yards establishing a new record for rushing yards and was a member of the iconic 1985 Chicago Bears Super Bowl Championship team. Payton was elected to the Pro Football Hall of Fame in 1993 and among countless other accolades had his number 34 retired by the Bears. Payton's relentless drive and hard work was lauded by fans and his peers alike. His motto of "Never Die Easy" applicably describing his style of play on the field and his drive to help others off the field. The Walter and Connie Payton Foundation has served to raise awareness for the need of organ donations impacting countless individuals as a result. After Walter's tragic passing at the young age of 46 in 1999, organ donation registrations exploded in his beloved city of Chicago adding over 13,000 in number by the following year. Walter's inspiration to help others has continued on with additional efforts including Walter Payton Cancer Fund (Est. 2002) and to take an active role in helping those less fortunate to find stability while providing opportunities needed to live their lives with dignity and pride. Fittingly, the NFL Man of the Year Award for philanthropy and community impact was renamed the Walter Payton Man of the Year Award after his passing in 1999. The Jarret Payton Foundation is committed to positively impacting the lives of children and adolescents physically, emotionally, and psychologically by creating and providing programs that present them with a wide variety of opportunities specifically designed to develop their leadership skills and enrich their lives. We are humbly honored to present these materials from the Walter Payton Collection and equally pleased to relay that a portion of the auction proceeds will benefit the Walter and Connie Payton Foundation and the Jarrett Payton Foundation in addition to NFL Auction Charities. 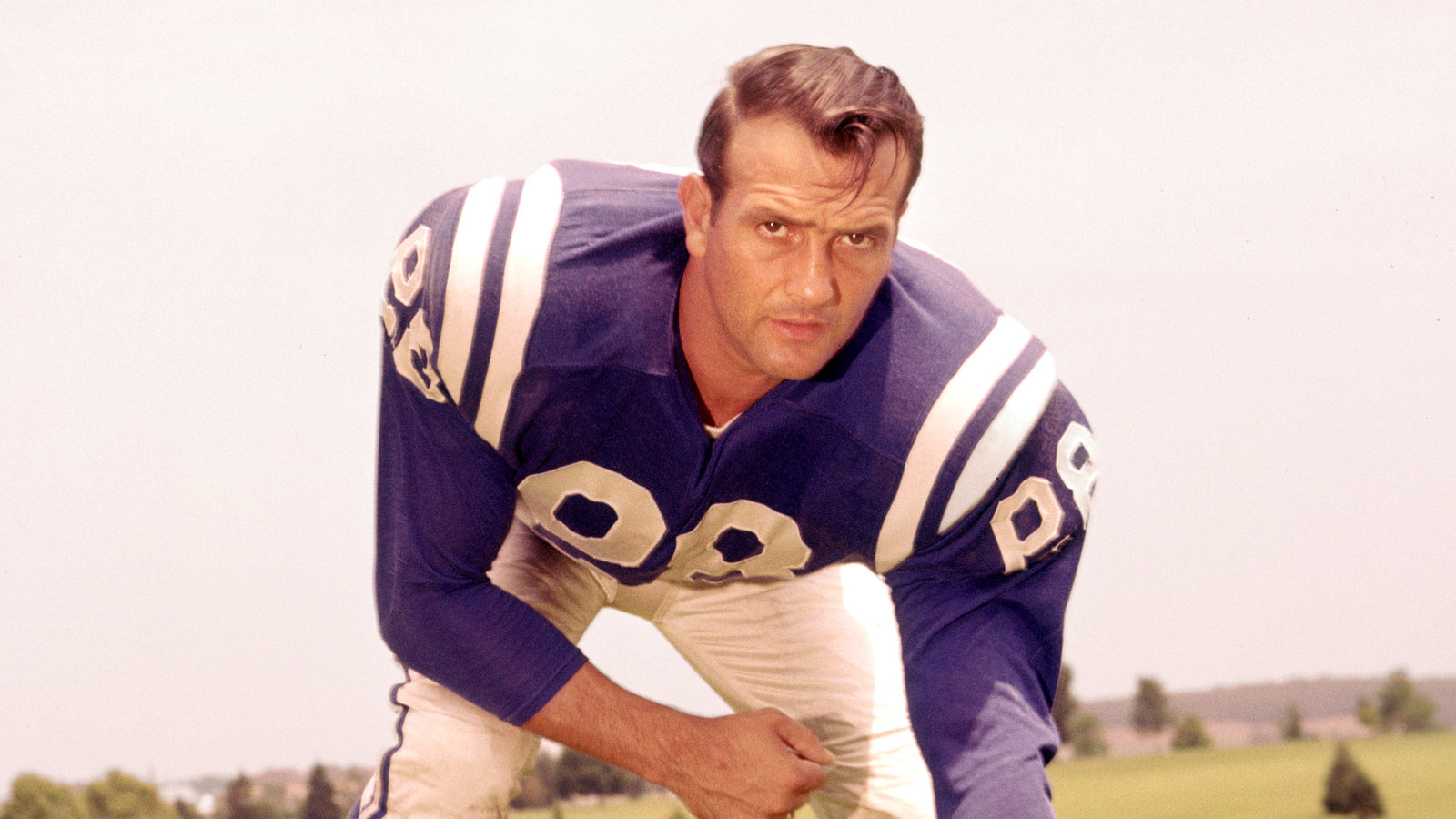 The following lots 78-98 originate from the personal collection of Gino Marchetti. Marchetti was an integral member of the Baltimore Colts dynasty from the 1950-60s era. Standing at 6'4" tall Gino was an imposing figure with imposing strength. After high school Marchetti admirably enlisted in the US Army and fought in the Battle of the Bulge. Gino credited his service with providing him the discipline to then go onto a stellar career in the NFL. Marchetti did just that terrorizing opposing lineman and quarterbacks with a relentless drive. His efforts were a key factor in the Colts 1958 and 1959 NFL titles and earned him enshrinement into the Pro Football Hall Fame and was named to the NF: 100 Greatest player roster. In 1972, Marcetti was voted by the Pro Football Hall of Fame as the greatest defensive lineman in the history of the game. The presented items originate directly from Gino Marchetti's personal collection and are being offered for the first time publicly. 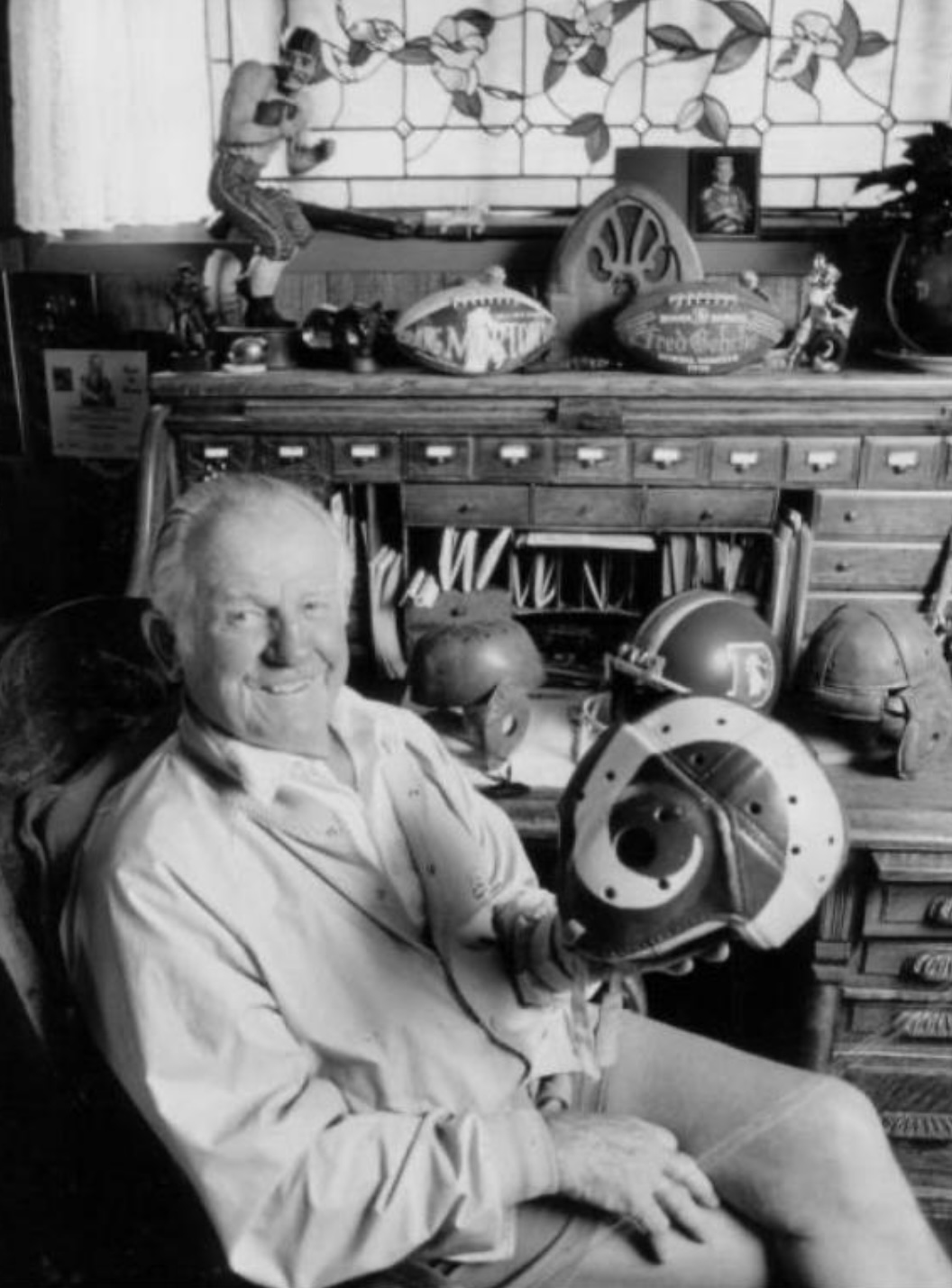 ITEMS FROM THE FRED GEHRKE COLLECTION

Lots 203-217 originated from the personal collection of Fred Gehrke. Gehrke was a lauded running back and cornerback at the University of Utah graduating with a degree in art in 1939. While his excellent play on the field would lead to a career in the NFL with the Cleveland/LA Rams, SF 49ers, and Chicago Cardinals it would ultimately be his art degree that would leave a lasting legacy on the game of football. Fred Gehrke had a hand in several innovations to the game of football including a facemask design and sideline kicker's net. However, it would be a simple yet elegant pair of painted golden yellow Rams horns that would transform his career and in many ways the history of marketing within the NFL. The following materials were originally part of Gehrke's personal collection and are being offered at public auction for the first time. 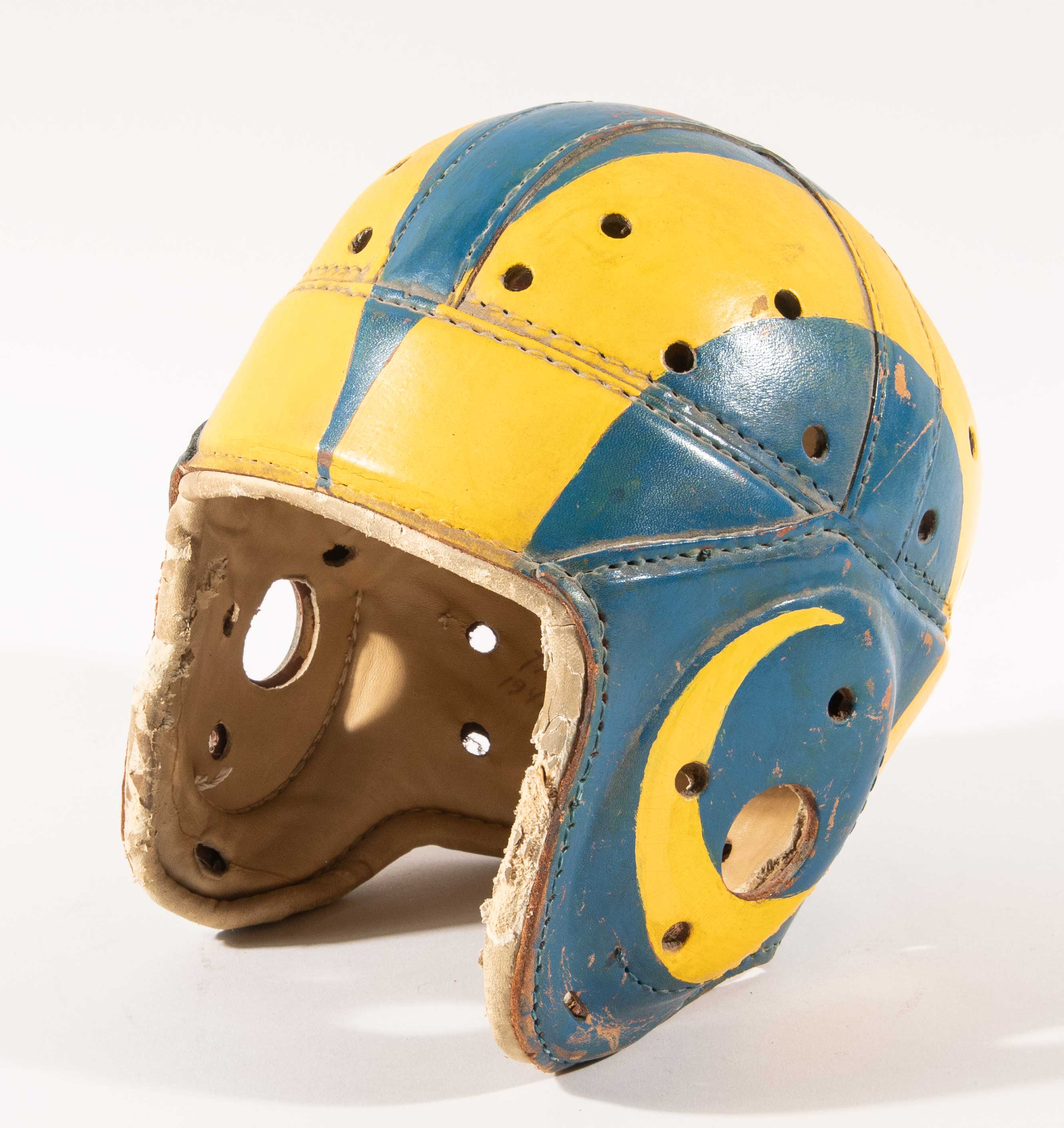